Humans for Humanity is an NGO headquartered in Dehradun, India. Established by Mr. Anurag Chauhan, it aims to create a better world to live in by distributing food, educating the poor, and in a nutshell, simply extending a helping hand to those who can’t reach out.

At the tender age of fourteen, Mr. Anurag Chauhan was deeply affected by the inequities he saw around himself. Driven by a desire to do his bit to change the world, he started with social work. Initially, he volunteered with Art and Culture groups and NGOs. He started groups and even got consultation requests from other companies at a very young age. Humans for Humanity was born much later, in 2014. The organization started a lot of projects to help the downtrodden sections of society, such as: 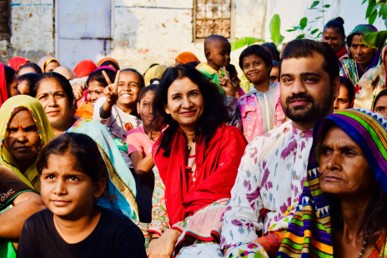 • Kathputhli Project, which aimed to empower communities by supporting them financially.
• Each One Teach One, under which children were educated for free. HFH set up 17 schools in slums itself in and around Delhi. Children were provided with food, stationery, and other essentials.
• Street Smart -Children were taught basic life skills such as cooking, baking, computers, etc., so that they could make a living for themselves and become independent.
The results of these initiatives were astounding. In Delhi, children could no longer be seen begging in a 2-3 km radius. The rate of drug addicts and children who had turned to petty crimes also went down significantly.
HFH also works to promote art and culture because our heritage needs to be preserved. India’s rich and diverse culture is what makes it stand out, and we must take pride in it. So, HFH promotes all kinds of upcoming artists and gives them a place to express themselves. The organization has also taken a stand for the textile industry, which is rapidly falling apart since the advent of fast fashion, which is mostly built on slavery. This is why HFH started promoting indigenous Indian wear.

HFH aims at debunking myths and stereotypes, fighting gender and caste based oppression, uplifting the general standard of life.

HFH envisions a future where the now distressed are monetarily independent and walk with pride instilled in them, living a quality life.

HFH does not believe in charity but helping those who do not have enough privilege to find opportunities to rise out of their situation.